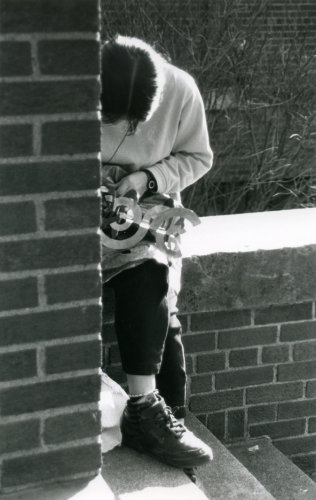 The Plexiglas sculpture happened to be placed on a stool directly in front of the wall of my living room. Because its surface was sanded to emphasize the designs, the light from window passing through the sculpture cast a shadow of varying amounts of light on the wall. The shadow had all the fine, delicate details and textures of the sculpture. As time passed, the form and position of the shadow changed and shifted little by little until the sun went down. In the night, the shadow appeared again as soon as the light was turned on.

One morning, as I was watching the shadow of my sculpture on the wall, a thought came to my mind: The traces of the shadow are also the traces of time, particularly, the traces of the time that I spent here in the past five years. It took me five years to bring this sculpture-shadow into being. But, my life did not begin five years ago and end at this moment. It’s still in process. I realize that my artistic serial is an ongoing project which is a dialogue back and forth between myself, my life and the work itself. I can never know when this ontological interpretation of being in the world begins and where it ends. I am on my way forever.

I set up my slide projector in front of my sculpture and projected the image on the slide, my hometown Ilan in Taiwan, onto the wall. The image overlapped with my sculpture’s shadow. The stories deep in my mind about my childhood and families in Taiwan came alive and merged with my present life. The shadow of my sculpture and the image of my hometown, an illusion based on a distant reality, appeared and transmitted the messages about the ambiguity of time, space, and reality. At that moment, I experienced what Ben Shahn said, “I can follow them (the imagery) backward at least to that point at which they disappear into the limbo of the subconscious, or the unconscious, or the instinctive, or the merely biological” (1957, p.33).

I came to realize that my interpretation of my art and the meaning I want to convey through it would change from time to time as my life keeps evolving. It is open for interpretation. The meaning of the work will be shaped, revised and recreated by the artist’s and its viewers’ stories rather than accepted unthinkingly.